The DBC forms part of a strategic investigation into improving the supply of water in Far North Queensland to achieve agricultural development and provide water security for the Etheridge Shire.

The strategic investigation is supported by funding from Phase 2 of the Queensland Government’s Maturing the Infrastructure Pipeline Program. The Etheridge Shire Council secured the funding and contracted Jacobs to undertake the investigation in accordance with the guidelines prepared by Building Queensland (BQ).

A detailed assessment to investigate opportunities for water and agricultural development in the Gilbert catchment was completed in 2013 by the Commonwealth Scientific and Industrial Research Organisation (CSIRO). This assessment investigated several options to provide water and advance irrigated agriculture in the region. It found that a new dam on the Gilbert River was the option most likely to meet the identified service need in the area.

The hypothesis underpinning the second stage of the strategic investigation, the DBC, is that a new large dam on the Gilbert River will facilitate the development of irrigated agriculture on the fertile soils along the river. This, in turn, will support economic diversification and critically contribute to social prosperity in the region.

The key objective of the DBC is to explore the opportunity of the dam as a new infrastructure solution to deliver water primarily for irrigation.

This report details technical, financial, economic, social and institutional dimensions of the Gilbert River Dam. It details the next steps for the project and demonstrates the technical feasible and economic viability of project.

At the Ordinary General Meeting dated 20th May 2020, Council received the final version of the DBC with Council resolving to endorse the the Detailed Business Case (DBC) for the Gilbert River Irrigation Project.

At this stage Council is working through the findings of the Detailed Business Case and is in the process of developing a forward plan and strategy to continue to progress this project.

The Gilbert River Irrigation Project unlocks the opportunity for targeted development of an irrigated agriculture sector in the study area. The project is consistent with contemporary federal and state strategies related to the promotion of high-value agriculture production and the development of northern Australia.

The dam wall will cross the Gilbert River approximately 3.5 km downstream of the Carnes Road crossing and stand approximately 31 metres. The dam can store approximately 323,500 ML water and has an inundation area of 5,847 ha. The land which will be inundated is currently used for cattle grazing. The water will be delivered to customers up to 60 km downstream (north-west) of the dam and up to 70 km west of Georgetown where soil suitable for irrigated agriculture is available.

The main dam and spillway will be constructed using the roller compacted concrete (RCC) method to minimise construction risk. In contrast to other construction methods, an RCC construction can be overtopped by a flash flood, even when partially built, without being damaged or washed away. This is important as the Gilbert River is prone to flooding during summer following erratic but heavy rainfalls in the upper catchment.

Geotechnical investigations have revealed that the proposed site is suitable for the development. Some localised pressure grouting and foundation treatment will be required—particularly below the central section of the existing Gilbert River.

Delivery of water to irrigators will be through an 81.6 km network of pipelines and plastic-lined open channels, requiring a pump station and balancing storage.

The major beneficiaries of the project will be downstream landholders along the Gilbert River who will be able to initiate irrigation projects.

Yield modelling confirms that the dam can supply two types of water allocations with a combined annual nominal allocation of 130,000 ML comprising:

The project can support 17,900 hectares of new irrigated agriculture to the west of Georgetown. Assuming a crop mix of cotton, peanuts, avocados, bananas, citrus, fodder crops and mangoes, the project will deliver a total economic benefit of $85 million per year, or $839 million over 100 years, in today’s dollars.

The project will generate significant employment benefits in the Etheridge Shire. During construction, the project is estimated to generate 370 construction full-time equivalent (FTEs) jobs over three years. Once operational, an additional 2,285 FTEs ongoing jobs related to the project, including 779 FTEs directly related to agriculture and 1,506 FTEs jobs indirectly related to agriculture (e.g. jobs in the provision of goods and services to agriculture, including transportation, processing, mechanical services and accountancy).

Through the injection of money into the regional economy and employment, the project will provide important economic impetus and generate social benefits for the community. Jobs will help reverse the recent population decline and rising unemployment experienced in the Etheridge Shire and the nearby Croydon Shire. Given the diversity of jobs generated, the project will help alleviate the divide between the highly remunerated employed segment of the population and the currently unemployed or people with low remuneration. 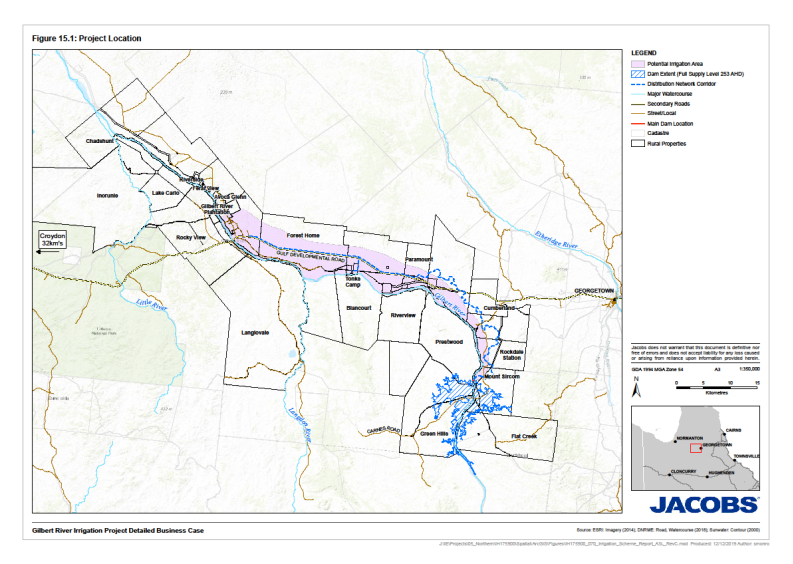 For the Gilbert River Irrigation Project Detailed Business Case and Appendicies please use the following link;