Etheridge Shire is founded on its mining heritage and as time rolled on; cattle and more recently tourism have become the economic drivers of employment and prosperity, but employment in the mining and cattle industry has fallen significantly over the years.  Data from the Australian Bureau of Statistics show that people employed in mining in the Etheridge Shire fell 89.9%  from 169 (in 1996) to 17 (in 2011), and employment in agriculture fell 41.5% from 212 (in 1996) to 124 (in 2011).  The ABS does not report on employment in ‘Tourism’, the jobs are recorded in other categories (e.g. retail, or administration) and results of the 2016 census are not yet available.

In 2010, Council committed, in its Corporate Plan, to stimulate investment in existing and new industries creating a sustainable, diverse economy. Council first considered the Geopark concept in 2015, as part of the Gulf Savannah Tourism Strategy, later (September 2016) the Etheridge Shire Council decided to investigate the concept.  Currently, Council is undertaking a regional approach to developing the Geotourism Industry in Etheride and has decided not to lodge a nomination to become a UNESCO Global Geopark this November as a result of community feedback.

Council decided, at its General Meeting of June 2017:

Having regard to Council’s resulting decision not to proceed with an UNESCO application at this time, Council was provided with three alternative strategies which took into account these stated community concerns, but at the same recognising that Council was intent on establishing a major internationally recognised, geotourism destination which could stand alongside the other two major destinations of Far North Queensland – the Great Barrier Reef World Heritage Area and the Daintree World Heritage Area. Please read through the discussion paper on concepts for Geotourism in the Etheridge Shire below:

In 2013 the Queensland Government commissioned a foresight study by CSIRO Futures to identify and understand the megatrends likely to affect Queensland tourism over the next 20 years. These megatrends pinpoint the changing economic, social and environmental circumstances that affect people's travel choices:

Council’s proposal is consistent with the State Government’s Tourism Strategy.

Over $2,064M is spent in North Queensland annually by tourists (Cairns, Port Douglas, Cassowary Coast and Atherton Tablelands).  If 1% was spent in Etheridge Shire that would boost the Shire economy by $20 M and result in additional job creation.

Geotourism incorporating all types of ‘Nature-Based’ and ‘Cultural’ tourism: 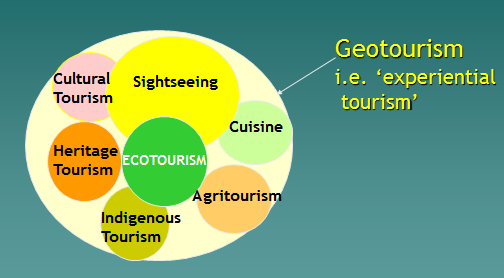 Understanding how Environmental, Natural & Cultural Heritages are included in the Geopark is as easy as A, B, C: