It all started over a couple of beers with the bloke next door and his mate from Sweden who was complaining about the lack of variety in take away food available in town, and we decided over a few more beers, that someone should buy the old Antbed House and turn it into a café or something. 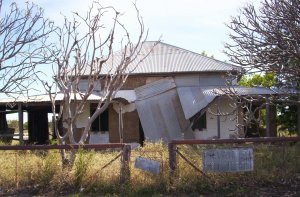 The truth is I had looked several times at the old place and even approached the Council at one time about making it a community project to restore the old building, this met with the typical “don’t be stupid, who’s going to get involved with that, besides the place is Heritage Listed.”

Sunday morning arrived, a little blurry I might add, and I just couldn’t stop thinking about the old place so after breakfast I walked up the road just to have another look. That was it, I was hooked, all these ideas started flooding into my head and the more I poked around the more fascinated I became.

About six weeks later I had bought the property from its current owner and his son, we signed the paperwork on the bonnet of my Suzuki at the gates to his cattle yards out on his station and I handed over the money, done deal, the old girl was mine.

Next thing was to contact the EPA Heritage Dept and find out where to go from here. I spoke to a very excited gentleman at the Townsville office who was somewhat elated that I was enquiring about restoring the old house rather than bulldozing it.

The senior Inspector from EPA Cultural Heritage Townsville came up to Georgetown several months later and we spent a couple of hours looking over the place while he explained to me what was required by EPA for the restoration process to begin, and begin it did, the longest paper trail you could imagine which continues to this day….

By the time I had built a large storage shed at the back of the block and cleaned up the yard sufficiently to allow regular mowing to keep the place looking as though someone did actually care, almost 18 months had passed and apart from removing a few sheets of loose roofing iron from the barely standing veranda, I had done nothing about the house itself. Some days just looking at the old girl made me so depressed, this was such a huge job and I just had no idea where to start, what the hell was I thinking, and the last wet-season had caused so much damage to the antbed brickwork that I had real fears of the whole place crumbling.

Back to the EPA and some frantic calls to Rob for some advice as to what I should do next. Again this required an enormous amount of paperwork to specify each repair job, what the work process would be, exactly what materials would be used and what if any effect this would have on the cultural heritage of the property and so on, all in triplicate with photos. I was pleasantly surprised though at how quickly the response came back from EPA and the fact that all of repairs proposed had been approved.

Some of the work was now quite major, for instance the repairs to the roof timbers that had been badly damaged by termites, as was the only remaining timber floor in the main room and sections of the wall at the rear of the house that had been washed away by the months of constant rain.

I had to do something now, no more procrastinating, and again begged the question, where do I start, the walls, the floor, the roof, what?

Saturday, I’d finished mowing up at the house and decided I deserved a beer, off to the pub for a couple of quiet ones.

“Jeff, how you mate? Back in town for long? Yah I’ve got a couple of kitchens to quote on and some building work for the council to finish, how’s that house of yours, have you started on it yet? No I just get more depressed every time I look at it. Hey you know I’m still keen to do some work on it for you, if you like I’ll slip up and we measure a few things up and get some quotes on timber”,” hey that sounds great”, “after work tomorrow”, “right”.

I went to the house every day after work for the next few weeks tidying up, shoveling out the wallaby poo and other rubbish, looking at what I could do while I was waiting for Jeff to get back to me with some quotes. Finally I decided to start on the repairs to the walls, I’d had all the bricks and lime mortar shipped up weeks ago.

It was a couple of weeks before I heard from Jeff again and by that time I had pretty much finished the brickwork inside and couldn’t do anymore until the old veranda had been removed, so I started on the floor in the main room only to find it was much worse than we first thought, the termites had attacked just about every stick of timber in one way or another. Right that’s it, pull the whole lot out and start again from the ground up, bearers, joist and new boards.

Hell, Jeff’s going to be here next Sunday afternoon with all the timber flooring ready to put down and there’s nothing to lay the floorboards on, and not enough of that size timber to replace all that’s needed, on the phone order the timber for the bearers and joists from Payless, arrange to borrow a truck for Saturday, get up at 3am drive to the Tablelands grab the timber and drive home and unload. Get up early Sunday, cut and lay all the bearers and joist ready for the boys to nail off in the morning, oh my aching back, I don’t know how I am going to do this for a whole week with these guys, ahhh.

Six days of constant work, usually 10-12 hours a day from the three of us (I took a week’s holiday from my work at the Council) had seen the roof repairs completed, except for re-nailing the roof iron, the new floor in the main room finished, new eves and fascia’s and the old original galvanized iron gutters repaired and back in place. 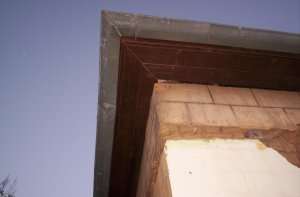 During the process or repairing the roof we had also removed all the dilapidated remnants of the old veranda which had been a major concern, this now gave me access to upper section of the exterior walls of the house, making it easy to affect the necessary repairs to patch them up.

The one thing I had done in all those months of procrastination was research the old place and some of its very early history. I wasn’t particularly interested in the later stuff, but more about who built the house, when it was built and some of the earlier occupants. This started me on a fascinating journey back into the history of the Etheridge Shire, its mining heritage and just how significant it was to both the Mining and the Cattle Industries right to this present day.

The house was commissioned by a gentleman named Thomas Garaghty who at the time was the Qld Government Mining Surveyor between 1886 and 1901. The house first appeared in the Council Rates Ledger in June of 1889 under a Goldfields Residential Lease. The Antbed bricks had been made at Durham Mine about 6 miles west of Georgetown and carted by horse and dray to the site at the corner of South and Haldane Streets.

Garaghty lived and work in the house while he mapped the entire Etheridge Goldfield, and produced a set of four maps that were featured in the Qld Gov submission to the Federal Gov in 1900. Garaghty also produced a series of six sectional plan drawings of the most productive mines in the region, these were included in the report, and I have acquired copies of all of these and I feel sure that they would most likely have been drawn in the old house.

Tom Garaghty left the shire for the Palmer River some time around 1901 and as far as I can tell was never to be heard of again. The house was then taken over by the Newspaper Editor Mr. Axel Everett and his family, the Everett’s lived there until the paper “The Mundig Miner” was taken over by Mr. Arthur Gard around 1917. And it is understood the Antbed House changed hands a number of times in the next three decades, although no transfer of the lease was recorded in Georgetown. 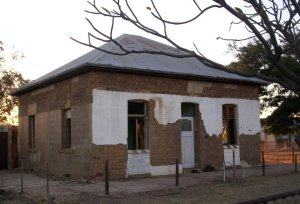 Now, my whole attitude to the Old House has changed, after that first flurry of repairs, I have gone on to finish the repairs to the brickwork inside and repair and re-render the internal doorways. I spend all my spare time and pretty much all my money on the restoration work, it surprises me just how much pleasure it gives me, every new challenge, every new skill you have to teach yourself, every job that I get finished just seems to add to the sense of achievement truthfully I’d rather be at the house working than anywhere else, except maybe the Pub. And my hope is that one day it will actually be finished and once again stand proudly atop the hill as a Mining Heritage and Science Museum.

I believe we should all leave something behind when we go, and this hopefully will be my contribution………..